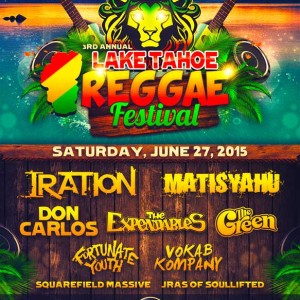 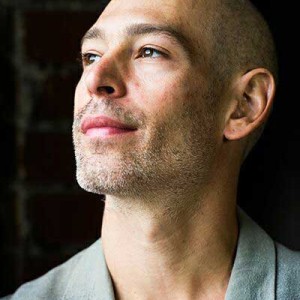 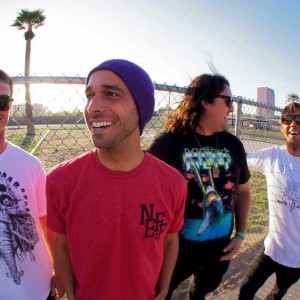 Lake Tahoe is the place to be this summer for the best reggae, hiking and swimming, gaming and dining and all-around Irie vibes. Mark your calendar for the last weekend in June and join us for 3rd annual Lake Tahoe Reggae Festival on Saturday, June 27th presented by PR Entertainment & Hard Rock Hotel & Casino.

Multiple songs by Iration have topped alternative radio station charts throughout the country and they have been touring nationally since 2007, performing at festivals such as: Lollapalooza, Wakarusa, Sierra Nevada World Music Festival, and Sunset Strip Music Festival. Iration has headlined several successful national headline club tours with numerous sold out shows nationwide. They blend reggae, rock and pop to create a truly unique listening experience.

Matisyahu has come a long way since 2005 when he released his breakout album, Live at Stubb’s (which reached #1 on the Reggae Albums Chart and #30 on the Billboard 200). Since then he has pushed himself dynamically and creatively, breaking with expectation at every turn and remaking his musical image with nearly every album.

Born Euvin Spencer, legendary reggae artist, Don Carlos was born and raised in one of the most deprived regions of Western Kingston, Jamaica, in a district notoriously known as Waterhouse, which incidentally is also a musical spawning ground for many of Reggae’s greatest ever talents, such as King Tubby, Black Uhuru, Junior Reid and King Jammy, to name a few. Don Carlos started his singing career in 1973 as one of the original members of Black Uhuru and then started his solo career. Within three years Suffering was released taking the fraternity by storm and was a massive hit in Africa, selling unprecedented units. Unfortunately, the album was bootlegged, and Don never received proper royalties. He has been touring in Europe, South America, Hawaii, and the western US. Don’s popularity has been consistently growing, so he is now one of the most sought after roots reggae artists in the business.

The Green formed on O’ahu, Hawai’i, in 2009. The group began as a vehicle for six different members of Hawai’i’s tight-knit music scene to record a few songs and have a bit of fun along the way. Their self-titled debut album, released in 2010, earned both critical and commercial acclaim, and was awarded iTunes Best Reggae Album of the Year.

The Green’s latest album, Hawai’i ’13, opens with a chant. “From the times of ancient Hawai’i and even up to present day, chanting has been a part of our culture,” says JP Kennedy, guitarist, vocalist, and one of the band’s five songwriters. “It’s a way to start something important. When we chant, we ask for blessings, knowledge, and guidance so that we can be ‘pono’ or righteous in whatever we do.” The chant of “He Mele No Ku’u Hawai’i” prepares the album’s listener as much as the band. Hawai’i ’13 dances through roots reggae, soul, and R&B.

The Expendables enjoyed a laid-back lifestyle growing up in Santa Cruz, CA; surfing, skating, partying, and playing music were commonplace. Since 1997, The Expendables have staked their claim in the California surf/rock genre by headlining venues from coast to coast. Blending Reggae, Punk Rock, and 80s style dueling guitar solos, The Expendables have made heads turn and floors shake for years. Thirteen years later, five albums down and countless miles covered The Expendables show no signs of slowing down.

Upon releasing their full-length album they quickly rose to #2 on the iTunes Reggae Charts and also locked in a #13 position on Billboard Top 100 Reggae Albums. Receiving great praise for early success, Fortunate Youth strives to spread their interpretation of Reggae music to Music Lovers worldwide.

Advanced general admission tickets for the reggae festival are $45, VIP tickets are $90; and kids 12 and under are only $10, and kids under 6 are FREE. For more information and hotel info, please visit www.hardrockcasinolaketahoe.com or www.prepresents.com