A Reason For Living a novel, is set in the creative and volatile Jamaica of the 1960s 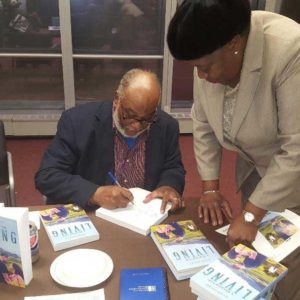 Julian Jingles autographs copies of his novel A Reason For Living, for Dr. Millicent Comrie, at the launch at John Jay College, New York City. 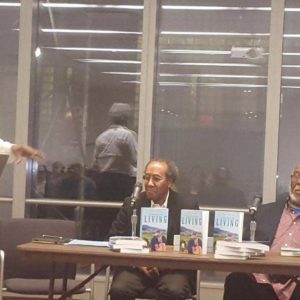 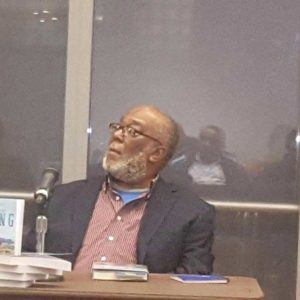 Julian Jingles the author of A Reason For Living,

The book is available at major online booksellers, amazon.com, barnesandnoble.com, the publisher iUniverse.com, and in bookstores.

The decade of the 1960s is arguably the most transformative period in world history. From the American civil rights struggle that gave the world Martin Luther King and Malcolm X, to the emergence of world pop culture that evolved The Beatles, the Rolling Stones and Bob Dylan, and the emergence of African and Caribbean independent nations from the colonial domination of Great Britain, France, and Portugal.

The little country of Jamaica was at the helm of these developments, gaining independence from England, discarding over 400 years of Spanish and British domination, racism and classism; and unleashing some of the greatest creative talents in music, sports, dance, and intellectual applications.

A Reason For Living, the just published novel by Jamaican-American writer, documentary filmmaker, Julian Jingles, is set in this most interesting period of Jamaica’s history. The novel described at its recent launch at John Jay College of Criminal Justice, in New York City, by keynote speaker Dr. Basil Wilson, retired Provost and Senior Vice President of Academic Affairs at John Jay College, as “a significant achievement by the author,” who began writing it in 1966, as a teenager just leaving Kingston College high school in Jamaica.

“Riveting, touching on micro and macro relationships of love, sex and politics, and the search of Jamaicans for the essence of their existence, battling social injustices, economic deprivation and inequities, and the role of culture in all of this. The book has many compelling scenes and some very touching, sensitive dialogues,” is how Dr. Wilson spoke of the novel.

The author read two passages from his work and invited the audience to pose questions. He said that one of the most striking experience he has had, is that although “80 t0 85 percent of the book was written 50 to 52 years ago,” it remains relevant to what Jamaica experiences today, and quoted a line from William Shakespeare’s play The Tempest, “what’s past is prologue.”

He cited the ’60s as a period of great creativity and volatility, with 15 gangs operating in Kingston, naming among them Phantom, Mau Mau, Pigeon, Skull, Spanglers, Idaho, Untouchables, Spoilers, Vikings, Hot Steppers, Shower Posse, and Phoenix battling each other, protecting turfs and invading others, driving fear into many Kingstonians. With this emerged ska, rocksteady and reggae music with star power names like Bob Marley, Peter Tosh, Burning Spear, Jimmy Cliff, and Monty Alexander, capturing international attention.

Julian Jingles has had a professional career spanning 52 years writing for publications such as the Jamaica Gleaner, the New York Amsterdam News, JET magazine, the New York Daily News, and the New York Carib News. He has produced documentary films, music concerts, and a stage play, along with investing in several entrepreneurial projects.

The book is available at major online booksellers, amazon.com, barnesandnoble.com, the publisher iUniverse.com, and in bookstores.