Marquis Melody Shows His Mellow Side 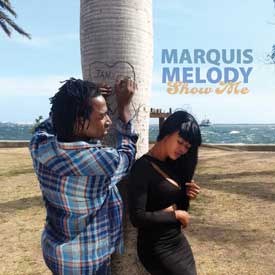 Reggae singer Marquis Melody pays tribute to the Hawaiian sound with new single “Show Me.” The song vividly captures the essence of the relaxing style of music of the South Pacific islands.

The song, the last release before the artist soon releases his long awaited second album, features breezy guitar sounds and typifies the style played by musicians from Hawaii and Pacific Islands in this region. Show Me is a love story about a girl pleading to a boy to give her some assurance about his love for her. The song is accompanied by a brand new music video shot recently in Kingston, Jamaica which is also where the song was recorded.

Show Me is available digitally through iTunes and various online music sites. The video can be viewed independently on YouTube and will be featured on international television networks including HYPE TV in Jamaica. The Oakland, California based reggae artist has been steadily building a name for himself with an eclectic mix of reggae fused with other styles. Marquis Melody parlays a vocal sound untypical of many reggae singers from Jamaica with a uniquely interesting singing style featuring multicultural twist the likes of which is found more in Africa.

Most recently Marquis has several times ranked number 1 by fans of ReverbNation of all reggae artists operating in the San Francisco – Oakland Area. He is looking to build upon performances in that region and elsewhere. Last summer the artist traveled to Hawaii and Japan where he promoted his last single “Roots Party” which ranked well for weeks in Richie B’s Top 30 Reggae Singles charts in Jamaica and others. This time around Marquis will take his unique sound this summer to Europe and elsewhere.

Jahwill - Up Up Up (Above Star) 3rd Annual Lake Tahoe Reggae Festival Featuring: Iration, Matisyahu, Don Carlos, The Green, The Expendables And More