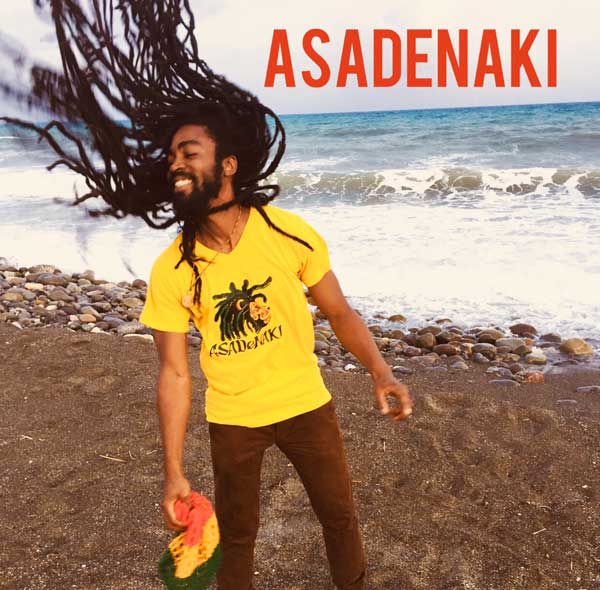 RFG: Greetings, please tell our readers how to pronounce your name?

Asadenaki: My name means “Mystery” in an East African language, you can pronounce it sounding like “I saw di natty”. My dad named me that as my middle name because during the Sonogram the doctor could not decipher my gender, therefore = mystery

RFG: Where were you born & raised?

Asadenaki: I was born & raised in Kingston 20, Washington Gardens then in high school after attending Meadow Brook High, I migrated to Atlanta, GA where I attended Dekalb School of the Arts, a performing arts high school. That school’s motto was “Finding your you” they encouraged us to be authentic and discover our talents, I also went to that school with Childish Gambino who was acting at that time but is now a big artist. That school really was my first introduction to the stage and the camera.

RFG: Is that when you started singing?

Asadenaki:  Actually no, I’m a film/video buff so that was my focus while I was in high school, I also did video editing work for

RJR/Gleaner Communications Group here in Jamaica, so I tend to be hands-on with all my video projects.

RFG: When was your first public performance and first release?

Asadenaki: Hmm…I’d say it was around 2011 for a Bob Marley Day Festival in Trenchtown, I was a back-up singer for my sister CenC Love and then they called me up to sing one of my own songs. My first single as a solo artist was “Living” which now has over 300K views on youtube, that song and video launched “Asadenaki” and put me on the radar. This single was a great experience, I love the fact that local and international people connect with my song dem.

RFG: Being the son of the legendary Bunny Wailer must be an incredible experience. Do you sing many of his songs when you perform and please tell us about having him as your father?

Asadenaki: The great news about being Bunny Wailer’s child is that he’s a very straightforward man and gives his honest input. Having Bunny Wailer as my father is a great experience, you know he is a staunch Rastafari and he instilled many of those values in his children growing up. But I have to say he always let us choose our own path and never steered us. He always say “Self-taught is the best taught”. So for example I taught myself how to play the guitar. When he hears my music he is always honest like “Dat wicked” or maybe, “Hmm…dat no ready”. He never tells us how to do something, he lets us do it our own way. While I was growing up he toured a lot. I knew he went to do the shows, I just never fully understood the deep impact his music had on our culture and people’s lives. Now that I fully understand my lineage, I raspect who, where, and what came before me. I value, recognise and give the utmost respect to the ones who came before and paved the way for us as Jamaican musicians, so I usually sing a song in my set such as “Rebel”, and add in my own verse. I believe in paying homage.

RFG: I see you just performed a song called “Higher” with Blvk H3ro at “Afro Beats on the Beach” in Jamaica. How did that collab come about?

Asadenaki: Interesting story- actually I was vibing with Blvk H3ro and Grei Show way up high at Pinnacle, you know Pinnacle is the birthplace of Rastafari and the home of Leonard P. Howell. I took out my guitar and we started singing, free-styling. Well it happened that a crew from Netflix was there filming a documentary with my father that’ll be released soon called, “Grass is Greener”. They heard the music coming from us and asked us to feature in the film right there on the spot, the song we had just created! So we did and it will be in the movie when they release it. We got together and recorded it proper so look out for that single “coming soon”.

RFG: What makes Asadenaki unique as an artist?

Asadenaki: I’ve been engulfed in the music making process, since I play the guitar and usually write my songs acoustically I find that I have a deep connection to melodies and vibrations that I then use to craft poetic truths. I like to think positive and so I express uplifting messages to encourage people to “DO” positive things. I’ve been told by fans that they love my word play. They call me a “wordsmith”. They love how I put my lyrics together because they can still relate to what I’m saying, its not jus lyrics to seem lyrical, its connection. I make songs we can all sing together, people always describe my compositions by saying “Yea man A My Tune dat”. I can sing and harmonise soulfully as you can hear on “Living” and I can also DeeJay with gritty vocals as you can hear on “Go Getta Medz”, so I can fit into many realms of entertainment. What I’ve also heard about myself from listeners is that as a second generation artist, they enjoy the fact that I’m not just singing my dad’s songs, people like my originality and are surprised when they find out that I’m actually the son of a reggae Legend. People tell me that although I sing similar subjects as other reggae artists, my organic demeanour allows them to connect to me. My thing is “1Life”, we only have one life to live so live your life to the fullest, once you have your life you’re blessed. Sometimes reggae talks about the struggles and oppression, but we have to look on the bright side too.

RFG: Your video “Rocking” with Aza Lineage just premiered last week, how was that experience?

Asadenaki: It was a great experience, Aza is a great artist and the male and female synergy on the track is truly sublime. The single has been getting great exposure worldwide since it released in June. We shot a video themed as a 90’s house party encouraging people to “couple up”. Haffi Big up Garth Daley the director, Simone Chukka and the entire production team of the video and Gldn_Eye the producer of the song.

RFG:  What else do you like to do besides music?

Asadenaki: I love to shoot, pictures, videos and especially shooting a football at goal. I’ve been playing football (Soccer) my whole life. I still play sometimes with other artists or a scrimmage with people in my community. In February this year IRIE FM held a Lifetime Achievement Award honoring my father Bunny Wailer, I organised and played on the celebrity soccer team called the “Flying Lions” our team had Yaadcore, Kabaka Pyramid, Samory-I, Dre Tosh and some more bredren playing against veteran Reggae Boyz including Theodore “Tappa” Whitmore and Ricardo “Bibi” Gardner. I also like to enjoy nature, hiking, swimming at the beach, and farming.

RFG: What’s coming up for Asadenaki?

Studio One To Reissue 'Ska Authentic' September 21; Available For The First Time Since 1964 David Muir’s Love for Reggae on display at Exhibit