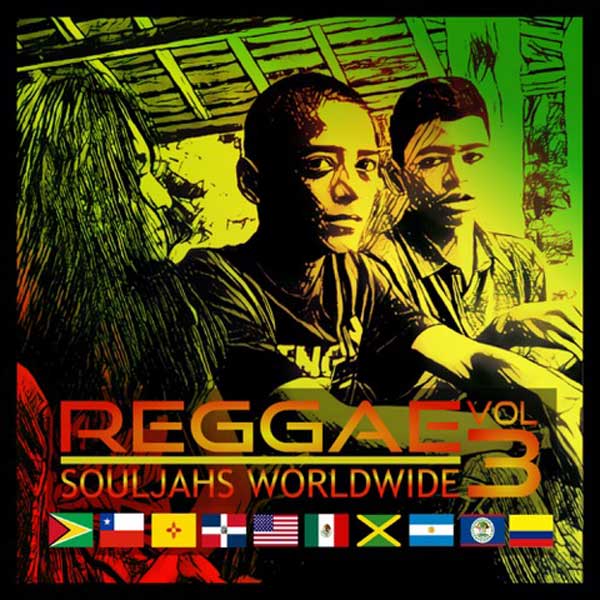 Reggae SoulJahs Worldwide Vol. 3 brings together a group of great artists representing Latin American and the Caribbean. This album series has been able to find reggae artists from around the globe and showcase their contributions to reggae music while proudly representing their countries. This album is not a world music album! This compilation is an original Reggae Dancehall compilation with artist delivering their music in the legitimate style and pattern. Volume 3 is focused on Latin America and the Caribbean with artists hailing from Puerto Rico, Belize, Guyana, Chile, Jamaica, Colombia, the Dominican Republic and the United States. You will be pleased to find some gems while you listen and discover some of these great artists.

Production for this album is courtesy of Florida based, Cuban producer, El Artillero Productions, and Albuquerque, New Mexico’s Brytell Studios. El Artillero Productions provides the Blessed Love Riddim, a new roots riddim which features some great songs which vary in topics and delivery styles. The second riddim titled Play This One Riddim was produced by Brytell Studios. Play This One is an upbeat dancehall riddim which will have you on your feet grooving to the various songs recorded on it. Artist and producer Sgt. Remo serves as the executive producer for this album and also delivers a couple of hits on this compilation.

The album includes gems by members of the D.O.V.E. Musik camp Ras Arcane (Chicago, IL), Ras I-Dre (Jamaica), Princess Kazayah (Chicago, IL), and the man himself Nego Hights (Belize). Sgt. Remo (Mexico/US) & Dre Z Melodi (New Mexico, US) team up to deliver two big tunes on both riddims featuring Ras Elijah Tafari (Albuquerque, NM) on the song New Day Joy. Guyana born Soulfiya provides a big song titled Rally Round featuring a young new talent Kroywen who adds some fire to the song. Hailing all the way from Chile in South America is renowned lyricist Jose Dolores providing us with an album favorite Yo No Se. Ras Levy, a Rastafarian artist/activist from Mexico City, gives us another top tune titled Atento. From Colombia we have the talented Tarmac with Lo Hecho Esta Hecho. Rastari Minajah, one of Dominican Republic’s pioneers of hip-hop and reggae delivers a scorcher with Alguien. Rounding off the album is New Dub Joy, a dub produced by Austin, TX dub producer McPullish.

Third World and Jordan T take over San Jose’s Music in the Park on Aug. 3 Reggae Sumfest/Downsound Entertainment has opened up a web store for merchandise