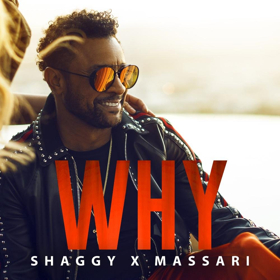 Legendary reggae musician, Shaggy teamed up with Canadian crooner,Massari to release their new record, “Why” via 300 Entertainment and Brooklyn Knights Entertainment. With an accompanying lyric video, “Why” is an uptempo club jam with a smooth chorus.

“Why” comes shortly after Shaggy released his brassy reggae record with Sting, “Don’t Make Me Wait.” The surprise duo are gearing up to release their collaborative album, 44/876via A&M/Interscope Records. After a string of performances and appearances on the 60th Anniversary Grammy Awards and Good Morning America, the two Grammy winners will embark on a European tour this summer.

Shaggy’s legacy in entertainment goes beyond reggae music. His multi-platinum singles “Oh Carolina”, “Boombastic,” “It Wasn’t Me” and “Angel,” have ushered in an undeniable influx of Caribbean-inspired flare into today’s pop music. Shaggy’s unparalleled ability to bring reggae music to the mainstream and has kept him at the forefront of pop culture. Just yesterday, Shaggy joined television show host and comedian, James Corden for a hilarious politically-charge skit on The Late Late Show with James Corden.

Fans will undoubtedly love the new music coming from Shaggy this year, keep a look out for the “Why” music video coming soon!