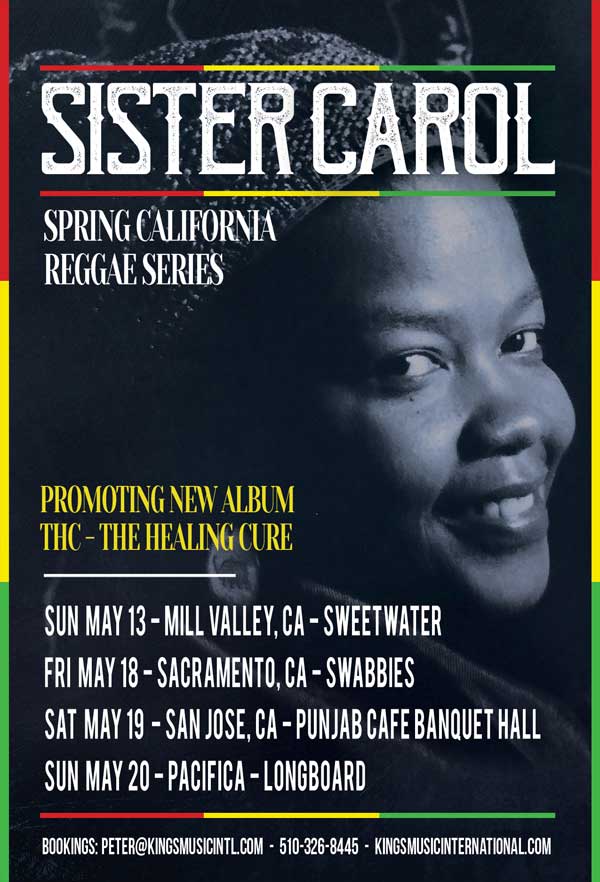 Sister Carol comes fresh again gifting the masses with her 15th studio album called THC – The Healing Cure. THC has certainly lived up to and surpassed her fans expectations featuring 15 vibrantly mixed tracks infused with a roots / acoustic sound. The lyrics are informational, humorous and enlightening. Sister Carol’s music evokes the listener’s undivided attention with her melodious singing and engaging messages. Make sure you pick up or download your copy of the new album T.H.C. – The Healing Cure by Reggae’s Mother Culture, the incomparable Sister Carol.

Sister Carol is undoubtedly one of the most talented, hardest working female reggae artists to be found. She has been working the front line for over thirty years. Her music carries a positive social message. Sister Carol is a modern reviver of the faith. Her music is rich with cultural values and social consciousness. Over the years she has been a top performer on many festivals. Sister Carol is exceptionally talented on the mic and she is also mindful of the importance of her influence as an example to her listeners. She stands as a singer upholding love, truth and rights.

Many people were introduced to Sister Carol through her acting in the Jonathan Demme directed movies Something Wild, Married to the Mob and most recently Rachel Getting Married. Her first feature film in 1986 was Something Wild with Melaine Griffths and Jeff Daniels followed by Married to the Mob with Michelle Pfeiffer, Dean Sockwell and Matthew Modine in 1988, and later she acted in the Oscar nominated Rachel Getting Married with Anne Hathaway. She more recently filmed a scene with Meryl Streep in another Jonathan Demme directed movie called Ricki and the Flash that was released in the summer of 2015.

Sister Carol was born Carol Theresa East, January 15 1959 in Kingston Jamaica. She is also known as the “Black Cinderella” and “Mother Culture”. She is a Grammy nominated singer, DJ, songwriter, actress, entrepreneur, educator and humanitarian.

Her odyssey began in the ghetto of Denham Town, Kingston in the midst of the exploding Jamaican music scene and has grown to become one of Jamaica’s top entertainers and a Global Icon. Her formative years were spent at St Anne’s Primary School and Mico-Practicing All-Age School. Her father Howard East was a senior engineer who dedicated his life, to his career at RJR (Radio Jamaica Rediffusion), the number one radio station during that time. He was also a very important part of the Studio One and Treasure Isle sound.
He regularly participated in sessions with the legendary “Clement Coxsone Dodd.” These early influences not only left an indelible mark on her heart, but also drew her closer to the infusion of the music industry.

In 1973, at the age of 14 her family immigrated to Brooklyn NY. The thriving dancehall scene of New York City led this young rising star to a path that would acknowledge her talents with multiple awards, television appearances, sold out concerts and movies
.
Following in the footsteps of her mentor and friend DJ Brigadier Jerry, her musical career began after winning talent contests in both Kingston and New York. Sister Carol was offered an opening slot for one of Jamaica’s finest vocal trios, The Meditations who had been the harmony backup vocals for Bob Marley.

This opportunity opened the door for her to record her first two records “Liberation for Africa” on the Serious Gold Label 1983 and “Black Cinderella” on Jah Life Label 1984, bringing her greatest talents, personality and vibe to a wider audience establishing herself firmly in the dancehall/DJ movement. During this time she dominated the music scene winning the coveted “Best Female DJ” for 5 consecutive years from 1983 – 1987. With these accolades behind her, in 1989 she established her own “Black Cinderella Record Label”.
In the midst of her success as an artist she continued to pursue an education attending City College of New York where she obtained a B.Sc. degree in education in 1984.

A true testament of her resilient spirit and energy spans nearly three decades in a male dominated industry, Sister Carol is a trailblazer for women in reggae. Her music carries a social message for people all over the world. Her message is rich with cultural heritage and infused with a vital social consciousness that permeates every aspect of life in the new millennium. (Hence her title as “Mother Culture”)

She has maintained a loyal fan base across the globe from Kingston – to Queens, Ethiopia to England, Detroit, Denver, East coast to West coast – Sister Carol reigns as the Queen of Reggae. Her prolific music career includes over 12 albums, a Grammy nomination for “Best Reggae Album” in 1997, “Most Outstanding Reggae Artist” two consecutive years 1997 and 1998, and “Queen of Reggae” in 2000 in Detroit Michigan, New York City Council Proclamation celebrating Jamaica’s 39th year of independence and honoring Jamaicans in New York for outstanding cultural contribution to life in the city of New York in 2001, Institute of Caribbean Studies Wash. DC – “Cultural Heritage Award for Excellence in Music” in 2004, “Lifetime Achievement” in 2008 in Columbus Ohio, “Roots Women in Reggae” 2009 and others. A showcase of Sister Carol’s greatest achievements includes: 2001 the release of “All I Have Is Love”/Tribute TO Studio One on the Easy Star/Black Cinderella/Napticorn label and recording her first live CD “Direct Hit” for release on the Catapult/ Black Cinderella label.

In 2003 she released “Empressive”cd on the “Black Cinderella label” which was also released in France on the m10 label the following year. In 2004- 2005 she toured France, New Caledonia, West Africa and USA promoting her “Empressive” cd.

In 2006 she celebrated her “Silver Jubilee” as a solo artist releasing a new CD/DVD “1Derful Words” on the Black Cinderella label. In 2007 she recorded a single titled “Dancing Shoes” with Bunny Wailer a former band member of Bob Marley and the Wailers.

With numerous interviews in mainstream media and has been a guest twice on NBC’s David Letterman, Late Night with Conan O’Brien,New York at Nite with Clint Holmes WORT.V., VH1 with Nile Rodgers, Good Morning America with Bryant Gumbel as well as earning praises in the print media such as Billboard, The Village Voice and many others. She was the familiar voice behind NBCTV Night Music with Jools Holland and David Sanborn as the MC. In 1999 Tuff Gong, the label started by reggae icon Bob Marley release Sister Carol’s Isis the Original Womb-man.

Beyond her music career she burst on the silver screen in 1986 in her first feature film “Something Wild” with Melaine Griffths and Jeff Daniels followed by “Married to the Mob” with Michelle Pfeiffer, Dean Sockwell and Matthew Modine in 1988 and most recently Oscar nominated “Rachel Getting Married” with Anne Hathaway. All three movies directed by the awarding Director Jonathan Demme.

As well as an amazing professional career her personal life stands firm. She has been married for over two decades and is a dedicated mother of four and a dotting grandmother of six, her true pride and joy.

On the Horizon – Sister Carol continues her entrepreneurial spirit – with her “Black Cinderella” clothing line with a CD produced by Glen Adams of Hippie Boys and Wailers fame and a duet cd of collaboration with many other artiste in the works for release soon. Sister Carol also appears in the soon to be released Bob Marley documentary “Stay with the rhythm”. Sister Carol is a Warrior Queen and a true Renaissance woman who continues to tour the world and teach her message in her musical classrooms. The majestical vibrations continue.