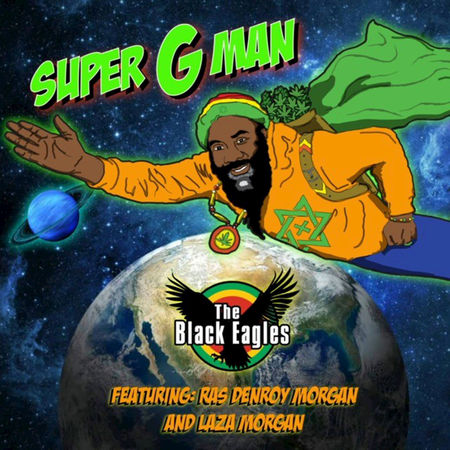 The Black Eagles Band was founded in 1974 by one of reggae’s most prolific patriarchs, Denroy Morgan. The band emerged partly from Morgan’s vision to create a hit machine for reggae in the early days of the music. But the creation of the band was also partly driven by Morgan’s own passion to bypass cover versions of the day, and replace them with fresh, original songs that could become anthems. In the early 1970s, a New York City-based reggae band was not just a necessity but an urgent need. To get the process started, Morgan placed an ad in the trendy, cutting edge Village Voice newspaper to recruit members and, not surprisingly, a diverse ethnic mix of musicians showed up for the audition.

The original Black Eagles band members were two Italians, one on drums and one on keyboards, an African on bass and a Jamaican on guitar. Denroy Morgan took control of the reins of the band and became the lead vocalist, the leader and the manager. His many roles included the acquisition of equipment, the recruiting of talent and the booking of dates. Initially the band was headquartered in the Bronx, and gradually, more Jamaicans joined the band, infusing it with more ‘yard vibes’.

The Black Eagles Band eventually relocated to Brooklyn. The ensemble flourished for six years until 1980, doing live performances in the New York City area, and regional tours in South Carolina, Virginia, Washington, DC, Chicago and in Michigan. The critically acclaimed band filled an important void in the 1970s. The band had its many triumphs, and in 1977 it won the New York Reggae Festival Competition. But Denroy Morgan had other dreams too. The continued management of the band was overwhelming, and just before breaking out nationally with the smash single ‘I’ll Do Anything for You’, he dismantled the band.

Fast forward to 2018, and the legendary Black Eagles is back on the road again. For the second coming, there is still a critical demand for reggae bands as there was decades earlier. Denroy Morgan is still the glue that connects the glorious past of the 1970s Black Eagles with a new millennium vision for the future. But this time around, much of the creative energies of the band are being driven by an immensely talented front man, a trained and experienced musician from Nyack, New York called Ianbassa.

The new front man for the new Black Eagles Band comes with impressive credentials. He’s an award-winning music graduate from the University of Bridgeport in Connecticut. He’s a songwriter and a vocalist, and he also plays the saxophone and the guitar. He has five years of touring experience in the New England region, and he has been passionately grounded in reggae and dancehall since high school. And with ethnic roots from Jamaica, Dominican Republic and Haiti, his musical vision can certainly be described as pan-Caribbean.

The new Black Eagles Band will be a harmonious blend of the old school tried and proven elements of reggae driven by the hit machine Denroy Morgan, and the contemporary nuances of the dancehall led by Ianbassa. The current band is multi-racial and it will build on the grounded legacy of the past, with overall standout improvements, especially in the area of sound. The current band consists of two female vocalists, a rhythm guitar, a lead guitar, a keyboardist, a bass player and a drummer.

In addition to studio recordings, the band will take on a full tour schedule that will sometimes include the backing of professional artists. A part of the band’s mission is to promote the medicinal and sacramental uses of ganja, and accordingly, the band’s first release will be a song called ‘Super G Man’, a celebration and a tribute to the therapeutic properties of ganja. This song is written by Denroy Morgan and Jammie Desiree with a Super G remix that will feature Laza Morgan. The second single is ‘Sweet Collie Herb’, written by Ianbassa, and that single speaks to the sacramental properties of the weed. Both songs will be on the ASAPH Records/ VP VPAL Music label.

“It is my hope that the band will embody the divinity of His Imperial Majesty Emperor Haile Selassie 1, King of Kings, Lord of Lords and The Conquering Lion of the Tribe of Judah”, Denroy Morgan declared”. “Experiencing a performance with the Black Eagles will be a full-bodied spiritual elevation.