Inside Reggae: An Afro-Jamaican Cultural-Musical Immersion 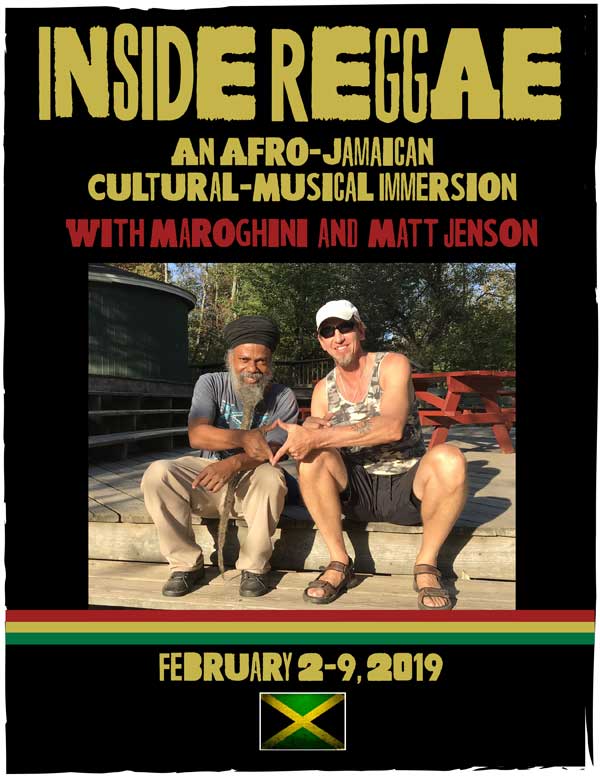 “Reggae music crawls into your bloodstream like some vampire amoeba from the psychic rapids of Upper Niger consciousness.”* If this music has crawled into your bloodstream with its earth shattering drum and bass riddim, its politically and spiritually driving messages of revolution and liberation, and its power to jettison you directly to a higher state of consciousness, than this cultural-musical immersion trip will satisfy your yearning for an even deeper, visceral understanding of Afro-Jamaican reggae music. Join Jamaican master percussionist Maroghini and keyboardist/songwriter/educator Matt Jenson as they guide you through the streets of Kingston and the lush countryside of this amazing island injecting you directly into experiences such as attending various concerts/jam sessions in the city with both well known and up an coming artists, witnessing musical demonstrations dissecting the roles of the instruments in various reggae styles with some of the master originators of the music, a trip to the hills to experience the sacred drumming roots and culture of the style (Nayabinghi and Kumina), a celebration of Bob Marley’s 74th birthday in a day-long music festival at his home, visits to some of the best known recording studios, some R&R time on the beach, and more.  This trip is part academic musicological study, part socio-political discussion group, part transcendent drum circle and part jam session / dance party!

Ideally suited for musicians (both professional and non professional) and non-musicians who have a deep affinity for the study of music from the perspective of a musician and humble witness of culture. [9days]

*A quote from Australian Journalist Michael Thomas, appearing in an article in Rolling Stone magazine, c. 1973

About Matt Jenson: Professor of piano at Berklee College of Music (Boston, MA) and creator of the “Music and Life of Bob Marley class/ensemble.” Matt has worked with Rita Marley, Judy Mowatt, and members of Steel Pulse. He currently leads his reggae group The Liquid Revolution and is touring with the internationally known Reggae band Groundation. He’s been to Jamaica many times, delving deeply into music culture and is currently developing the reggae educational platform, “The Art of Reggae.”

About Maroghini: Master percussionist from Kingston, author, lecturer, sound therapist and vocalist. Former percussionist for Jimmy Cliff. He has appeared on numerous studio recordings for a long list of internationally acclaimed musicians including Lauryn Hill, Eddy Murphy, Ziggy Marley and Stephen Marley to name a few.

Home At Last! - Peter Tosh's Son Leaves Hospital After One And A Half Years Ras Vuyo releases a debut album 'Diversion'