Coney Island Reggae On The Boardwalk, Back in Brooklyn For the Summer 2018 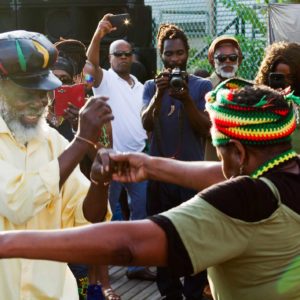 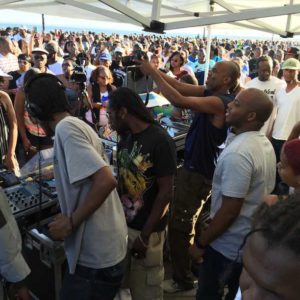 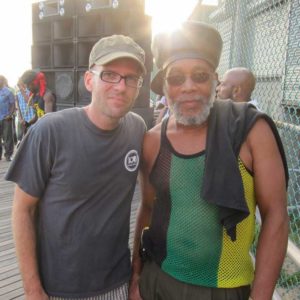 The ninth season opens and the 30th overall edition of Coney Island Reggae On The Boardwalk takes place on Sunday, June 3, 2018 at the iconic Coney Island Boardwalk in Brooklyn, New York.

The free, family-friendly, all vinyl, reggae sound-system session will run from 3 to 7 p.m. on the Boardwalk at West 20th Street, one block East of the Ford Amphitheatre.

The next three events in the series take place at the same time and location on Saturday, July 7; Sunday, August 5, and Sunday, September 9.

Reggae on the Boardwalk reflects the revival of interest in Jamaican sound-system culture and reggae vinyl. Reggae On The Boardwalk has grown steadily in attendance since the first edition in June 2010.

The free events are sponsored by the Brooklyn Arts Council, VP Records, and individual donations. “I’m really pleased with the public support from the Brooklyn Arts Council over the past three years, and from VP Records, which came on board in 2012,” says event founder and presenter Carter Van Pelt. “Individuals have also been generous in helping make it happen through crowd-funding on Indiegogo.com, understanding that it’s a free, community-oriented event.”

Van Pelt is formerly the host of the “Eastern Standard Time” radio program on Columbia University’s WKCR-FM in New York City and a 28-year veteran of non-commercial radio broadcasting, with a special love for Jamaican music. “There is nothing else in the world like Jamaican music, from ska to rock steady, reggae, all coming through the dancehall up to today. It’s an endless fascination, and Reggae On The Boardwalk has been the best way to share my passion with the Brooklyn and greater New York community.”

The 2018 series will include more than 30 selectors, each taking 30 minute shifts at the controls. Line-ups are subject to change and generally announced on social media prior to the events. Confirmed selectors for 2018 include Jah Wise from the original Tipper Tone sound, Sir Tommy, the Culture Cartel with Vaughn Allstar and Joseph Dimension, Selekta Twice, and Chanter International, the Timeless Sound.

This year’s July 7 event will feature all women selectors in a round-robin format, as a tribute to the late Lioness Edwards-Chen, a past event participant, who passed away in 2017.

The Brooklyn-based Chanter International sound system, operated by regular event selector Barry “Chanter” Dinham will provide amplification system (the soundsystem) for the event. In collaboration with his sons DJs Ziddy and DJ Timeless Movements, they are known as “Chanter International, The Timeless Sound.” Dinham is originally from the village of Clifton, Hanover, Jamaica.

“I started the event because I wanted to hear the music I love, played the way it was intended to be heard – on a big outdoor sound,” says Van Pelt. “Before long, other people who wanted to play their records, and I realized the event would grow if I brought in as many deejays and possible, each with their set of followers, and rotated the line-up like my friend Sir Tommy had done with his all night studio parties on Herkimer Street in East New York. That round-robin style inspired the current format, and it’s also how I met Chanter and a whole community of selectors who have been into this music since ska and rock steady days.

Over the years, the event has featured Brooklyn and great NYC-area deejays including Jah Wise from the original Tippertone Hi-Fi, a top 60s and 70s downtown Kingston set; Jah Life, New York’s most prolific reggae producer (producer of Barrington Levy); Downbeat The Ruler (Coxson Dodd’s designate after his own soundsystem days); Son’s Junior Sebastian, the only original Orange Street, Kingston soundsystem in New York; reggae producer Clive Chin from the Randy’s and VP music family; Sir Tommy, a Brooklyn-based producer and soundman; and Puma from LP International, a top New York sound in the 1990s; and Max Glazer from Federation Sound, producer of several songs from Chronixx’s Grammy-nominated album.